And now her first album, Let Me Love You, has arrived, and let me alert you, it is a good one. Lane has an original way with a song, and is most at home with ballad standards like "Cry Me a River." Her voice is as pretty as a Wyeth painting and as flexible as silly putty, with which it has in common the factor that it can take any shape and any form without strain.

In an uptempo song like "Everything I've Got Belongs to You," she can come across as sounding like Nancy Wilson, but for the most part, she has grown past her influences and become her own woman.

It's funny how, for a man who used to have an irrational prejudice against vocal jazz, I'm finding that prejudice crumbling because of singers like Nancy Lane,.

The Canadian singer, Nancy Lane seems to have a voice made for the elegiac song, the ballad and other similar music. But she can swing delightfully as well. You might miss this latter characteristic when you listen to Let Me Love You and when you go over the titles of the music on the disc. It happened to me when I first received her disc and flipped it on its back. So spin the disc before you make up your mind and cast it aside, Nancy Lane gives an alluring, absolutely breathtaking performance on this disc.

Lane is a singer who appears diffident about her range. She should not be. Not only does it stretch several octaves, but it has a certain brightness that makes her lines almost silvery. Often she can be heard crushing the downbeat with rhythmic flair and heart-stopping vocalastics as well. If you listen to What is this Thing Called Love or even before that Cry Me a River, you will hear what I mean. There is more. Lane sings with pristine diction and her enunciation might be cause for envy among her peers. This aspect of music cannot really be taught to a singer. She also seems to be born with relative perfect pitch. The manner in which she bends and twists notes and then restores the melody to its immaculate originality is something to behold.

Speaking of swing, Nancy Lane is really old school. She could have fronted a big band – one of those like an Ellington or a Basie Orchestra and she would have done the bands proud. If with a small ensemble she is able to push the players into a swinging zone so they absolutely play in the pocket, I can only imagine what will happen if and when Nancy Lane appears with a big band.

This record has probably made its appearance in a crowded field. North America and Canada are its intended targets and there are plenty of vocalists out there fighting for a share of voice. Lane is, however, in good hands as far as PR is concerned and her record appears to be getting some airplay. This is a good thing because talented new artists deserve our attention. I have one reservation that only Lane can take care of and that is to sing a more contemporary repertoire. I am dying to hear how she would handle thatNANCY LANE - Let Me Love YouReviewed by Jim Burlong Jazz Views UK, January 2016A fine group of musicians have been recruited for the project, some from the local Montreal scene alongside the likes of pianist Lara Driscoll and guitarist Kenny Bibace, who have both been widely recorded and currently in the bands led by Christine Jensen. The recording contains mostly standards from The Great American song book with a small number of contemporary pieces for good measure within the eleven track forty five minute play list.  The Opener "Let me love You" by Bart Howard, contains a superb guitar solo and lays down the format for most of the album. The vocals are relaxed and mature, most of the front line musicians are given time to express themselves . They also support the singer well during the ensemble passages. "Tout Ce Que Veut Lola" is a fine ballad presented in it's native tongue with a masterful muted trumpet interlude. Arthur Hamilton' famous torch song, "Cry Me A River", originally brought to prominence by Julie London is taken at half tempo and showcases the sultry tenor of Francois D'Amours. Lara Driscoll's piano is superb, particularly during the guitar conversation on Rogers and Hart's "You Took Advantage of me". The bass of Mike De Masic is inventive throughout and to the fore on "What Is This Thing Called Love".  Overall this is a high quality recording, by a vocalist who most certainly has talent and deserves an audience. However she may need to move somewhat more away from the standard repertoire with her subsequent output to attract a real following. In the meantime many will find this initial release ideal for late night listening.Let Me love You' from Nancy LaneBy: Susan Frances AXS Contributor Nov 23, 2015Vocalist Nancy Lane shows an instinct for jazz that's kindred to such singers as Nina Simone, Sarah Vaughan, and Carmen McRae. Her new release Let Me Love You is a compilation of jazz standards that Lane covers to an iridescent gleam. An avid torch carrier of cabaret-kindled blues, Lane's inflections and nuances caress the melodies and bring out a vivid luster in the tracks.Mike De Masi's hypnotic bass pulls coursing through the title track frame Lane's vocals elegantly while Lara Driscoll's keys add lesions of warm textures to "I Can't Believe that You're in Love with Me." The taut drumming by Dave Laing in "We're Together" has a bongo feel with samba overtones, which changes to a bopping canter in "Every Time I'm with You." The smooth curves of Lane's inflections imprinted along "Tout Ce Que Veut Lola" are accented by De Masi's grazing bass as the torchlight aura of "Cry Me a River" is embellished by the succor sounding chords of Kenny Bibace's guitar.The shuffling strides of Driscoll's keys in " Everything I've Got Belongs to You" has a Gershwin-esque touch, and the bossa nova-tilt of the rhythm section anchoring "All of You" swathes Cole Porter's tune in a Latin-enriched sheath. The leisurely stroll of Lane's vocals along "You Took Advantage of Me" infuses a cheerful glint in lyrics that express inconsolable sorrow to the audience. Her interpretation shines hope on a dismal condition. The spinning drumbeats of "What Is This Thing Called Love" are twined in tight bass pulls which turn soft and plush in the balladry verses of "Just Say I Love Him" as Driscoll's keys articulate arousing interludes.Let Me Love You is Lane's debut solo release, launching her as a jazz vocalist. Her interpretation of classic jazz numbers displays a versatility that places her in the ranks of notable cabaret singers who graced the stages of Cafe Society and the Cotton Club. She keeps the songs true to their original form while wrapping her vocals around each one and embracing the spirit in which they were made.ALL.ABOUT.JAZZNancy Lane: Let Me Love You (2015)

By GEANNINE REID,
Published: November 14, 2015 | 1,121 views
http://www.allaboutjazz.com/let-me-love-you-nancy-lane-self-produced-review-by-geannine-reid.php
Nancy Lane's vocal quality looms large in the crowded world of jazz vocalists, and with her recording, Let Me Love You, her melodic delivery will attest that she belongs to a small subset within the field.Lane is accompanied by a talented core of musicians that perfectly support her formidable skills to deliver a melody. Lara Driscoll is on piano, Kenny Bibace is on the guitar, Mike De Masi plays the bass and Dave Laing
Dave Laing
is on drums to complete the musical core of the project. With the addition of François D' Amours on tenor saxophone on tracks: "I Can't Believe," "Cry Me a River," and "Everything I've Got." Aron Doyle plays the trumpet or flugelhorn on tracks "We're Together," "Tout ce que veut Lola," "What is This Thing?" to complete the musical tableau.On "Let Me Love You" Lane lays it all on the line, as she interprets the lyrics to this song of love with her soulful rich voice. Instantly the listener will realize her voice has a wide range and is full in body and character, but most importantly, swings. Driscoll and Bibace add a magical touch to an already elegant tune with their musical solos.With "We're Together," the track radiates with and exuberant sexuality in a clever way that finds Lane navigating the melody and flawlessly conveying the rhythmic nuances in both the Latin and swing sections of the form. Doyle's solo is a study in a perfect marriage of excitement and clear musical phrases.On "Everything I've Got Belongs to You" and "What is this Thing Called Love?" Lane also shows a side that more vocalists should explore and that is perfectly expressing a melody at medium-up tempos. Lane also effortlessly tells the story of each song with creative augmentations to the melodic line and a wide reaching vocal range. Bibace adds excellent guitar work to both before mentioned tracks and D' Amours tenor saxophone unfolds a fine solo on "Everything I've Got Belongs to You."The rhythmic time keepers Masi and Laing heard throughout are unparalleled musicians at creating support and a solid foundation for both the soloist's and Lane to create in the highest musical manner. Lane's vocal quality, rhythmic clarity and range, adds much to this album. As mentioned, there is a paucity of genuine jazz singers and Lane is to be included in this limited group amongst the masses that call themselves jazz vocalists.Let Me Love You should be in the true jazzophile's collection, it gets no better with this true vocal gem. 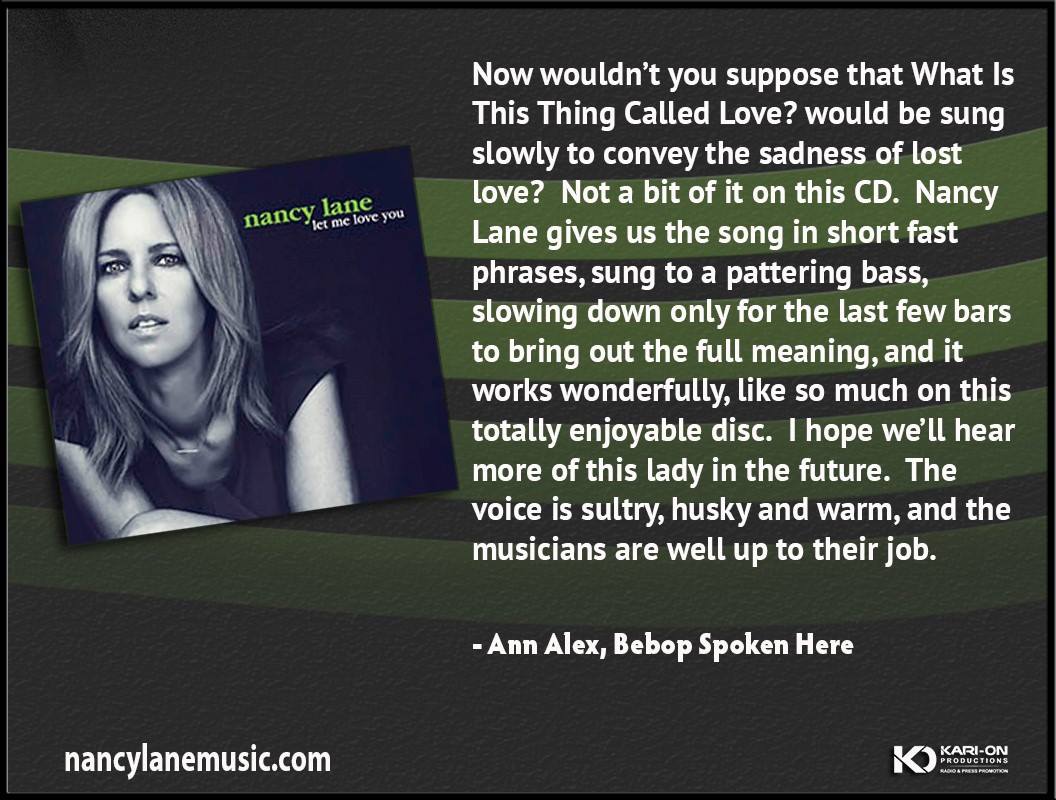 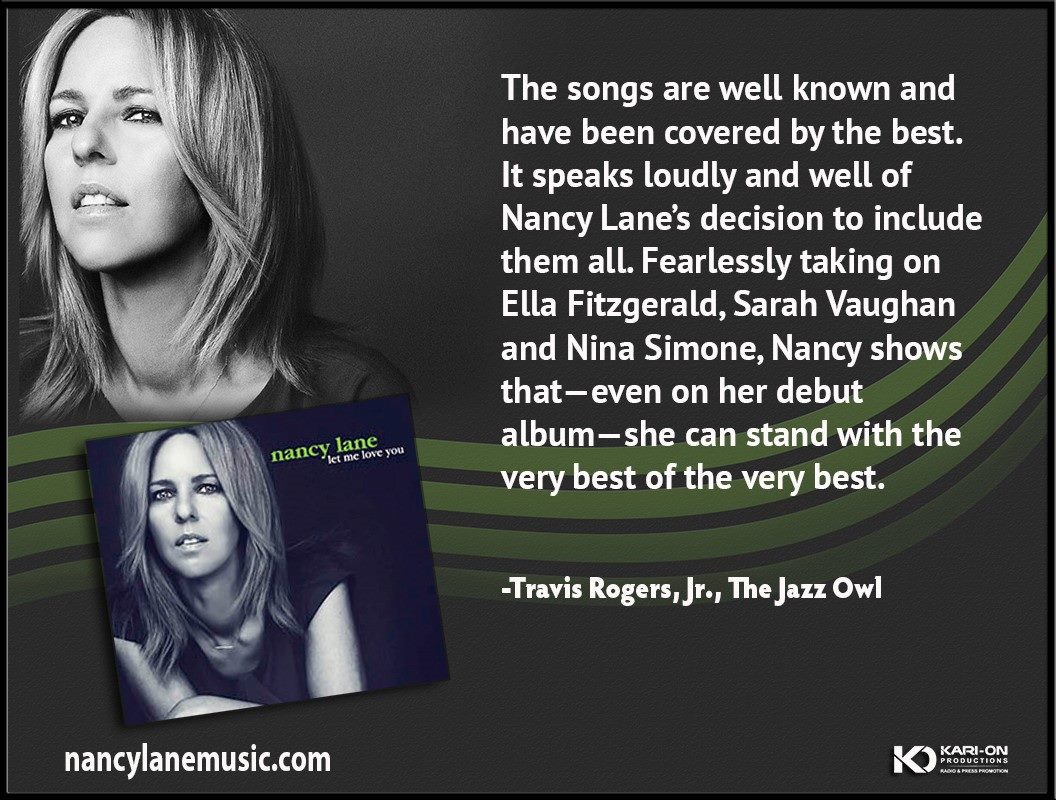 Amazon reviews
By Chuck on March 29, 2016
Format: MP3 Music Verified Purchase
I stumbled on this artist while reviewing "Jazz Singers" on Amazon. The girls got a style. She tackles song that were done by the greatest American Jazz singers and nails it.
Here's why I adore Nancy Lane: the articulation of the message in these songs is gloriously clear. But it's not so crisp that you're overwhelmed in technical perfection. A vocalist can be THAT and leave you cold. There's no chance that Nancy will make you feel anything but warm. Embraced. With a cozy fire behind you and a slew of memories that you cannot escape. Her approach to song is organic. REAL. There's nothing but authenticity in that golden voice. Trust me, I'm truly particular about who I support. And who gets played on my radio show. But all I had to hear is ONE song from Nancy and I was hooked. There's an expression that a cowboy singer had that he used in a song - many years ago. It was called "The Ring of Truth." And that is Nancy Lane in a nutshell. A nutshell with a blanket and a bottle of wine close by ;)   Radio Geisha Nov 8th, 2015
Just relax, listen and be transported into the realm of what love songs can do – make you feel loved. Nancy Lane simply has it all! Grady Harp, October 15